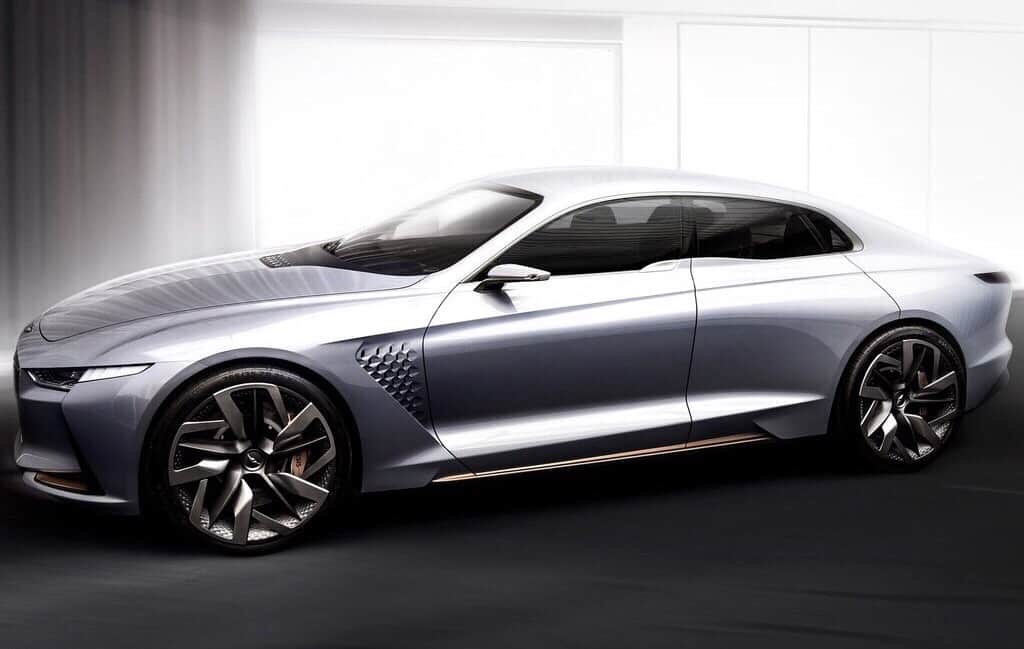 Hyundai Motor Co. has revealed its latest vision for the Genesis brand in a striking show car called the ‘New York Concept’. The hybrid powered concept car incorporates advanced technological features and showcases a design language that is said to emphasize aspects of Korean culture.

Designed under the direction of Hyundai and Kia design boss Peter Schreyer, the final concept design was ultimately overseen by Genesis brand design director Luc Donckerwolke, who joined the company to lead the new premium brand’s design efforts last year. Donckerwolke wasn’t meant to start until April this year, but got out of his contractual obligation with Bentley following the VW Group’s emissions debacle.

The luxury sports sedan concept, which takes aim at the BMW 3 Series in terms of size and market placement, is said to hint the Genesis brand’s design direction through an expressive and refined ‘Athletic Elegance’ theme, which was first seen on the Vision G concept revealed in Pebble Beach last summer.

The exterior of the New York Concept presents an elegant interpretation of a luxurious performance vehicle, defined by balanced proportions and refined surface treatments. Inside, the concept combines advanced technology with absolute luxury, contrasting innovative electronics against high quality materials.

“The New York Concept is a progressive concept car that showcases the design quality of the brand,” says Manfred Fitzgerald, former brand and design director for Lamborghini who was appointed Head of Genesis late last year.

“With its expressive volumes and refined design, the New York Concept truly embodies the ‘Athletic Elegance,’ that characterizes Genesis products and will continue to do so for future models that come from our luxury brand,” he added.

Designed to express the Genesis brand’s modern view of luxury, the New York Concept brings a fresh perspective to the segment by offering the unexpected, yet still satisfying the needs of modern luxury buyers.

The design teams took inspiration from modern luxury lifestyles and products, so it’s fitting that the concept would be revealed in — and named after — one of the most progressive cities in the world.

Exterior Design
The concept car’s nature-inspired character is depicted through simple yet powerful forms, voluminous surfaces and coherent features. Its overall shape is characterized by a long hood and dash-to-axle ratio, visualizing the car’s performance-oriented nature and its resulting athletic stance.

At the front, the New York Concept’s design embodies attributes Hyundai wants to instill in the Genesis line-up — power and confidence.

The tapered roofline emphasizes the car’s shoulder and rear haunches, bringing visual power over the rear wheels and quarter panels, while short front overhangs contrast with longer rear overhangs to create the proportions of an elegant and refined premium sports sedan.

The rear perspective is distinguished by a low rear deck enhanced by strongly tapered body. The slim, elongated taillamps echo the headlamps’ vibrancy, reinforcing the sensuous and luxurious character of the exterior.

With its visually expressive form, the New York Concept is complemented by thorough and creative attention to detail. The unique treatment of the hood and side vents blend function with style, creating a precision aesthetic. The hood, front fender and quarter panel vents improve aerodynamic performance, a reflection of the hybrid Genesis model’s fuel efficient slant.

The front and rear door handles are integrated along the belt line and sit flush with the body, further enhancing aerodynamic performance with simplicity in design. The exterior panels are finished in a Ceramic Blue color, while copper-colored inlays in the lower bumper fascia and sills convey the modern approach of Genesis design and material language.

Four individually sculpted single seats reflect the dynamic attributes of the exterior while acknowledging the Genesis focus on human-centered luxury.

A logical and spacious center console divides the interior space through its length axis into two separate halves. Combined with the curved, floating screen, the Central Control Panel (CCP) creates a new user experience through a tactile and considered control layout.

The high-tech and sophisticated ambience is emphasized by the use of an advanced information control unit with a distinctively curved display.

Eliminating some of the negatives often associated with increased technological content in a luxury vehicle, the design team took an innovative direction for the instrument panel design. A 21-inch floating, curved screen incorporates driver instruments and multimedia functions, creating potential for new, sculpted forms for the front seat occupants.

The digital display is combined with classic analog driver instruments. The concave screen and the convex instrument panel complement each other in an aesthetic interaction while transmitting visual lightness to the interior. The open steering wheel design is ergonomically formed to facilitate visibility of the instruments while enhancing control.

Color and Materials
The concept’s interior is swathed in rich leather. The tan-colored seats and doors contrast with anthracite accents, while sliced suede leather headrests lend a softer, tactile quality.

Metal is also used for contrasting effect, highlighting the visual connection between the instrument panel and the ‘visually floating’ center console. Copper-toned, stainless-steel mesh echoes the copper accents of the exterior and demonstrates a lightweight textile approach.

HMI Concept
The New York Concept features an innovative driver interface to cater to the growing complexity of a connected, digital world. It is said to set a new standard for user experience and function control.

Both the instrument cluster and center stack are merged into one curved horizontal display, allowing a unique driver-oriented architecture.

A super-wide, curved 21-inch 4K display made by LG hovers above the IP. Using the electronic giant’s Advanced High Performance In-plane Switching technology is said to allow for a greater viewing angle and exceptional richness in color.

The bowl-shaped Central Control Panel with 3D geometry, meanwhile, is ergonomically optimized for usability and forms an electronic centerpiece of this unique HMI concept.

The user interface presents all relevant information at a glance, combining touchpads with the advantages of today’s rotary dial-based interfaces, while a 3D gesture-control sensor allows the operator to ‘throw over’ specific content from one area of the screen to another, raising the freedom for personalizing the display information.

The New York Concept provides a glimpse into what Genesis has in store for the future of design, materials and technology, and signals the brand’s ambitions in a very crowded and competitive segment.

The concept’s design themes, overall execution and attention to detail are impeccable, which could make for a very interesting battle as the brand competes with more established premium rivals. 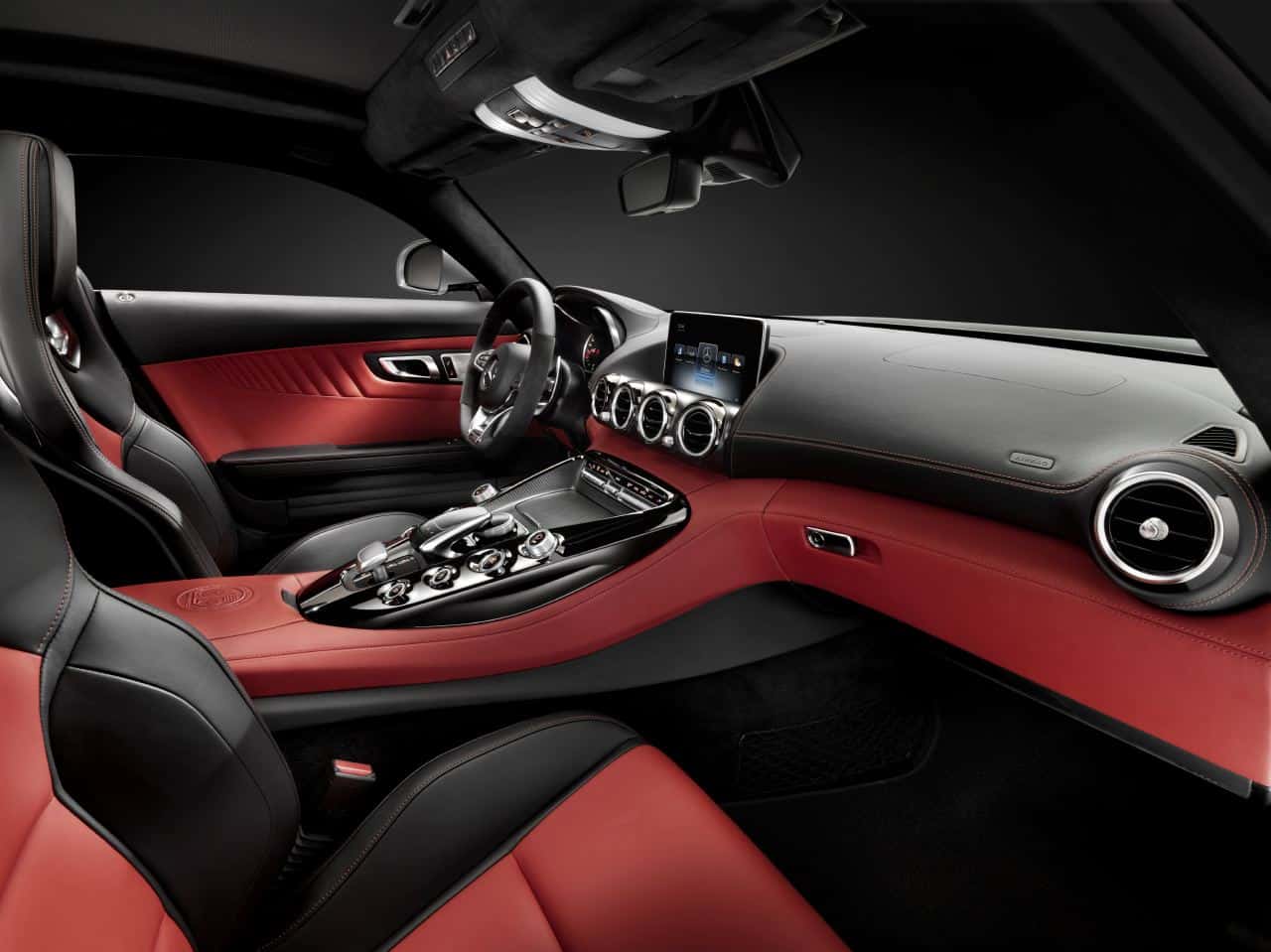 Inside the Mercedes-AMG GT