Designer Follows Passions and Dreams to Build His Own Supercar

Landing a position as a designer for an automaker is a dream job for many. It’s the result of hard work and dedication, hours of sketching and years in design school. It’s a process of honing skills that will enable the development of a portfolio that demonstrates ability and makes you stand out.

Carlos Salaff was one of the lucky few to have achieved this dream. Since he was very young he’s always had a passion for cars and motorsport, but he was drawn in by design. He pursued this goal and enrolled at Art Center College of Design. Upon graduating in 2003, he went to work at Mazda’s North American design studio in Irvine, CA.

As his first job out of school it was rewarding. He had a hand in designing the Mazda 3, CX-7 and new MX-5 as well as the Nagare, Ryuga and Furai concepts. But it wasn’t enough. He yearned for something more, something he could create himself; something that he could see built and enjoyed on the open road.

“Designers dream of doing,” Salaff says casually. It’s what led him to venture down the path in the automotive industry in the first place.

So he decided to leave his job to embark on another dream. He handed in his notice, moved his family across the US, and started his own bespoke car company, Salaff. He dove in head first into designing, developing and creating what is currently known as Project Caden.

We had a chance to catch up with Salaff to find out what made him want to trade in his decade old career as a fledging automotive designer to start his own company and build his own supercar.

Why did you do it?

“With my background at Mazda, I had an opportunity to do some pretty cool concepts. As big of a blessing as that is, it’s very brief satisfaction when you create something with your heart and soul and then it just gets put into a place and never seen again.

“I wanted to create something with that impact, but something more lasting that people could experience. What started getting really hard to ignore was the desire to create something with a holistic design approach, where chassis and suspension, the inner workings of the car as well as the exterior design and interior, were all built together; something where the mechanicals were as much of the design as the body.

“Those are the seeds of the idea. I knew that I wanted to create something high performance, and I’ve always loved vintage racing machines because of their rawness, that visceral connection of man and machine. I wanted to take that idea and root it in history, but create a fresh design with those values.”

So basically you were a frustrated designer who created a lot of concepts that never made it to production so you decided to bounce and pull a Daniel Simon and start your own thing. Is that right?

“I guess all designers are a bit frustrated to a degree. We all have our ideas on how things should be ideally. It’s a leap of faith, but something that I’ve had this gut feeling about for so long that I just couldn’t ignore it anymore.”

Yes. But you were working with Derek Jenkins and Julien Montousse, guys that, as far as I know, seem to be very nice men. Not to mention you had job security…

“Absolutely. It was a privilege working with some great people at Mazda. My move would have happened no matter what company I was at. I could see my future and I saw an alternative that was more appealing — to strike out on my own and shoot for the stars.”

So after a little over 10 years in the industry you decided to pack it in for a new venture?

“It’s been an exponential learning experience for me. As a designer, you’re in one area working on your sketching, your rendering. You’re creating forms, trying to lift up the brand. I really wanted to get deeper into the inner workings of the machine, to create a more holistic approach.

“As far as going the route of working at a car company, yeah, something small-scale seemed more appealing to me, where I could focus completely on artistry and create something handcrafted rather than mass-produced.”

Tell me a little bit about this machine. What is it based on, where did you get the inspiration to go out there and do this?

“I’ve really been inspired by vintage racing cars. For me, the era of the 60s to 80s are the most compelling. Those beautiful cigarette-shaped F1 cars in the 60s and when the aero starts to come in the 70s and 80s you get all of these other raw details happening.

“I think of cars like Jackie Stewart’s Tyrrell cars or the 80s Group C cars. The way those cars were built — with metals — appeals to me very much in an age where plastics are becoming the predominate material we build from. I still find this visceral appeal with aluminum and with rivets and I wanted to create something handcrafted and play up the beauty of metals.”

What can you tell me about the form language you’re implementing?

“I want to create something timeless. I’m after a design language that relies on dramatic proportions, beautiful volumes and clean surfaces. There is an honesty, simplicity and beauty to designs that endure over time. I’m striving to capture those attributes.

“Aluminum monocoques and those forms were so evocative and experimental in the Group C cars. And still to this day, the forms and the sounds are so special.

“Caden’s architecture is a combination of that F1 and Group C era, with a central F1 kind of cigar shape — the driver sitting at the center — and very expressive fenders shrouding the wheels, planting the car.”

What about the layout and mechanicals? How is it all coming together?

“From a layout standpoint, it’s mid-ship. It’s going to have a BMW V10, the engine from the M5 and M6 cars, previous gen; that’s a very expressive engine. It’s naturally aspirated; it’s very instant. That’s really the line conceptually. It’ll have a six-speed manual, of course. I didn’t want to have anything less involving than that.

“There’s very little in the way of donor things, just the engine and transmission. Everything else is pretty much handmade, down to the glass.

“The chassis is a ground-up build, a custom chassis. It’s a monocoque aluminum tub with a honeycomb floor and a rear stainless steel tubular sub frame with in-board suspension.

“The chassis is being built at Metcalf Racing, a shop in Texas. What’s cool about them is they specialize in restoring the very type of vintage racecars that I drool over, so they’re using a lot of those techniques that they use on those cars to build an original chassis.

“The mechanicals will be very much in view. The suspension will be in-board coilovers for the front units, and that will be right in front of the instrument panel, exposed. You’ll be able to see that linkage working as you’re driving. But it will be enclosed, with a canopy, Group C style canopy, fighter jet canopy, if you will.” 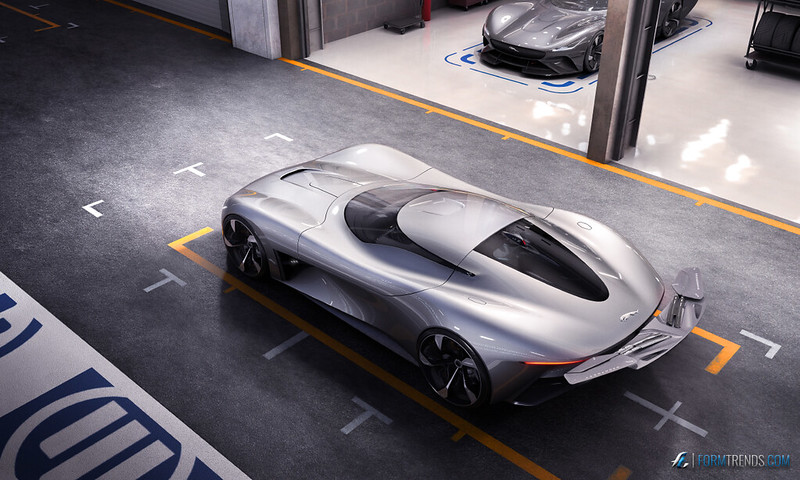