Edward Tseng presented four concepts at the 2016 Art Center Transportation Design summer graduation show. These included his Tesla Model 1 final thesis; projects done during his internships at Porsche and Hyundai; and a future vision for an all-electric Peugeot flagship.

The Tesla Model 1 explores a compact vehicle positioned below the Model 3 to expand on Tesla’s greater goal of creating electric cars for the mass market. Benchmarked from the VW Golf, the Model 1 has a higher floor to reduce frontal drag, increase practicality, and allow for clear airflow management underneath the body. The exterior and interior designs were centered on the concept of intelligent essentialism; that is, reducing the design to its bare essentials with a thoughtful and purposeful execution.

The exterior design manifests this design philosophy in proportion, surfaces and graphics. The cab-forward volumes take advantage of space enabled by electric powertrains and the elevated floor delineates an ideology of practicality and versatility. Surfacing on the design is minimal but features functionality. The fins that frame the body channel air along the sides while lower forms channel air from beneath the vehicle up and around it. The visual identity is also purposeful; the ‘grille’ sculpture on the Model 3 is was evolved and adapted in the Model 1 to channel air beneath the vehicle to cool batteries.

The primary objective of the interior design program was the exploration of IP architecture and functionality regarding the digital transition from the analog interface, and the openness enabled by electric powertrains.

Ultimately, the final design results in a layout that utilizes the screen as the main surface of the IP with the interior cradling it in place. The screen functions as a gesture/eye controlled UI and on the upper surface becomes a HUD reflected off the windshield. The steering wheel center interface is also completely digital and integrates critical information within the axis that stays in place while the wheel is turned. 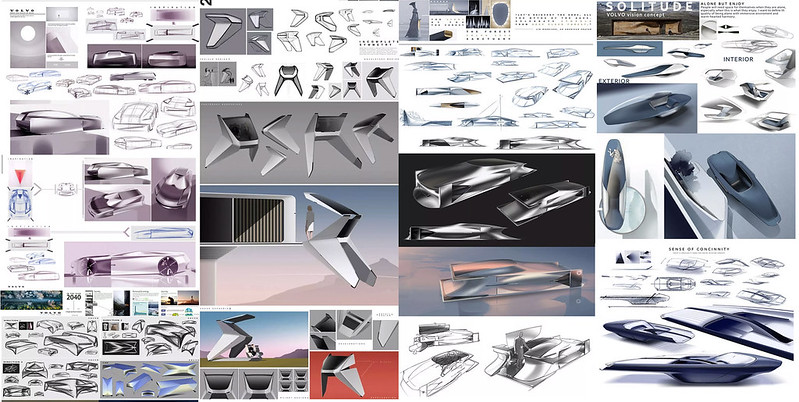